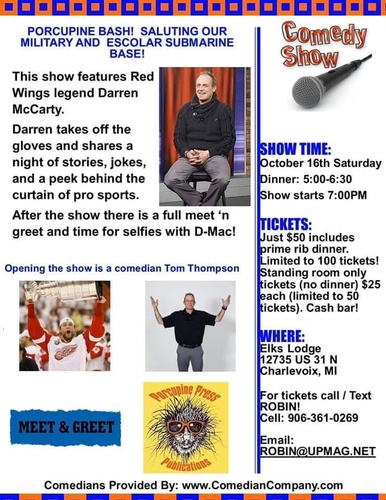 Oct 16, 2021
Prime Rib Dinner with all the sides and dessert 5:00-6:30
Raffles and 50/50
Dinner & Show $50.00 (100 tickets available)
Standing room for show only $25.00 6:30 (50 tickets available)
Cash Bar
7:00 Opening Comedian
Tom E. Thompson followed by
Darren McCarty, 4 time Stanley Cup champion and a Detroit Red Wing Legend - From his penalty minutes to his game winning goal to win The Cup. D-Mac tells it the way it is, the way it was, and the way it should be.
This show features Red Wings legend Darren McCarty. Darren takes off the gloves and shares a night of stories, jokes, and a peak behind the curtain of pro hockey.

Tickets are very limited. Please call, text or email Robin at 906-361-0269
robin@upmag.net to reserve your tickets.

This event is a fundraiser for the ongoing USS Silversides Submarine restoration fund. We will be collecting Gifts for Veterans at D.J. Jacobetti Veterans Home in Marquette and to The Aleda E. Lutz VA Medical Center in Saginaw.
Set a Reminder:
Business Directory Events Calendar Hot Deals Job Postings Contact Us Weather